Caravanserais in Iran are the witnesses of the Silk Road history and the passengers who traveled on these Persian mysterious roads.

Maybe can say, Iran is considered the cradle of old caravanserais. The main reason for this claim is that most of Iran’s land was on the Silk Road in the past. Thus, the date of the beginning of these monuments boom in Iran goes back to the pre-Achaemenid Era. Caravanserais in the Middle East are called inns that have large place for reside and rest of travelers during long journeys.

There are no exact statistics on the number of caravanserais in Iran. Only on the basis of the historical evidence can we say that most of these buildings were built during Safavid Era, especially Shah Abbas. Throughout history and with the expansion of cities, caravanserais have practically lost their use, but today, with the change in usage, they have retained their importance.

In this article, we would like to introduce 8 of most famous caravanserais in Iran.

Most Famous Caravanserais in Iran

This Caravanserai located 154 km south of Tehran, in the old route of Garmsar. Qasr-e Bahram Caravanserai means the Palace of Bahram, which is built on the command of Bahram V (Bahram Gor) the fifteenth king of Sassanid Empire. Later, during the Safavid Era, this place rebuilt and renewed and turned into a caravanserai in Iran.

The Bahram Palace Caravanserai, also known as the Abbas Abad Caravanserai in Iran, is currently used as a Hunting Outpost for the Desert National Park as well as a guest accommodation for tourists and researchers. 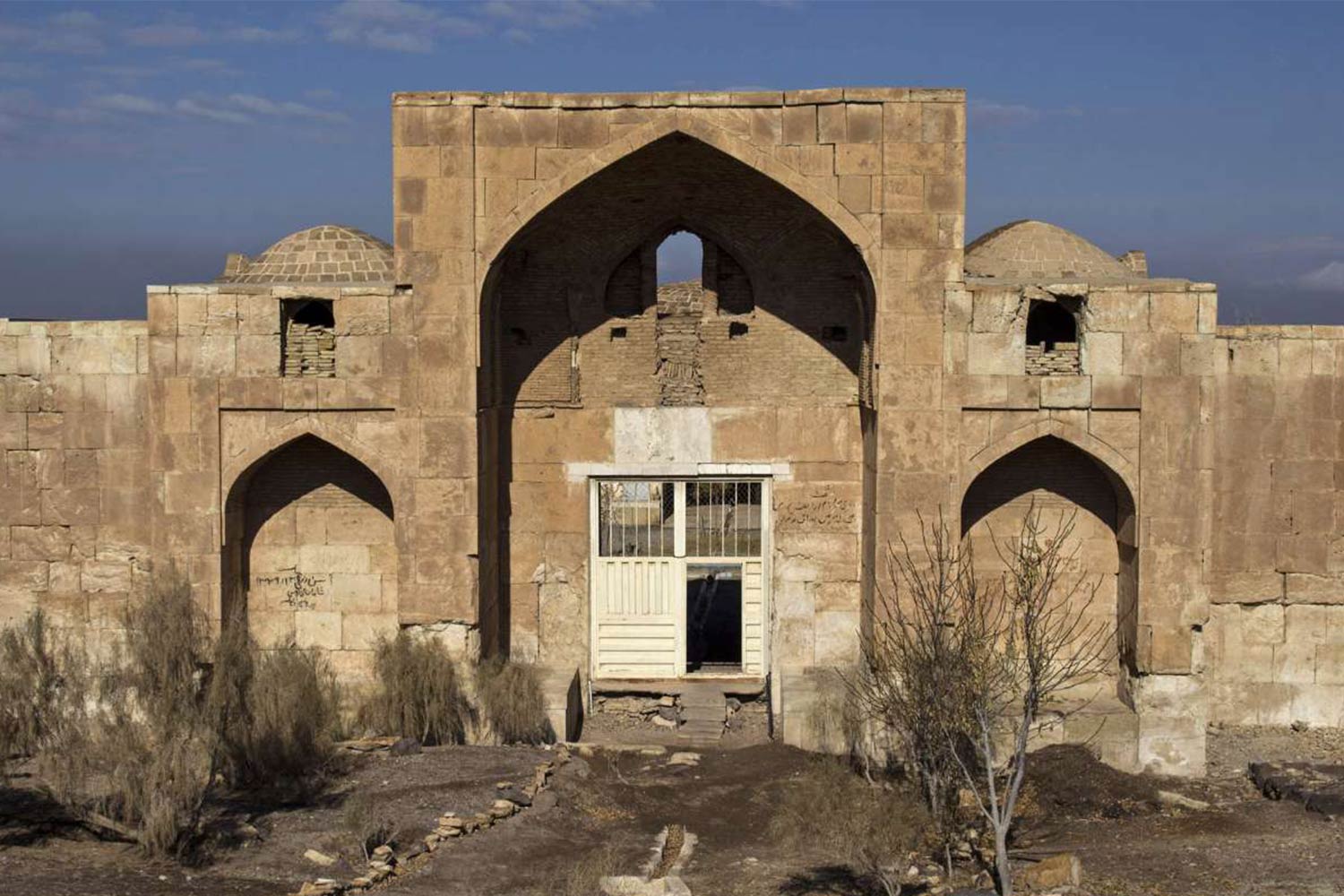 Zein-o-din Caravanserai is one of Safavid’s architectural masterpieces and is the only circular monument on the Silk Road. Zein-o-din caravanserai in Iran has circular plan and five semicircular planes attached to the Hashti (related to traditional houses in Iran and Iranian architecture)

Today, after being restored and retaining based on its originality, it become a popular traditional hotel. 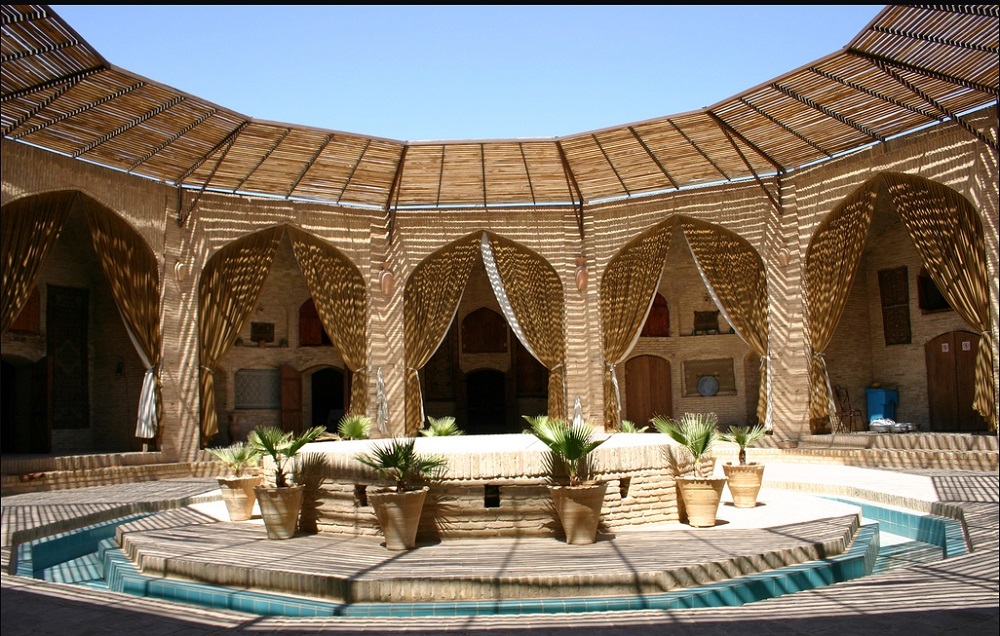 From outside, caravanserai facades look like a huge castle but the interior design is look like a palace. Ribat-i Sharaf Caravanserai has two courtyards with four iwans (terraces). Stucco decoration of this caravanserai, is one of the most interesting examples of this art at that time. Almost all of the brickwork that used on the walls, domes and arches, decorated with an attractive design. 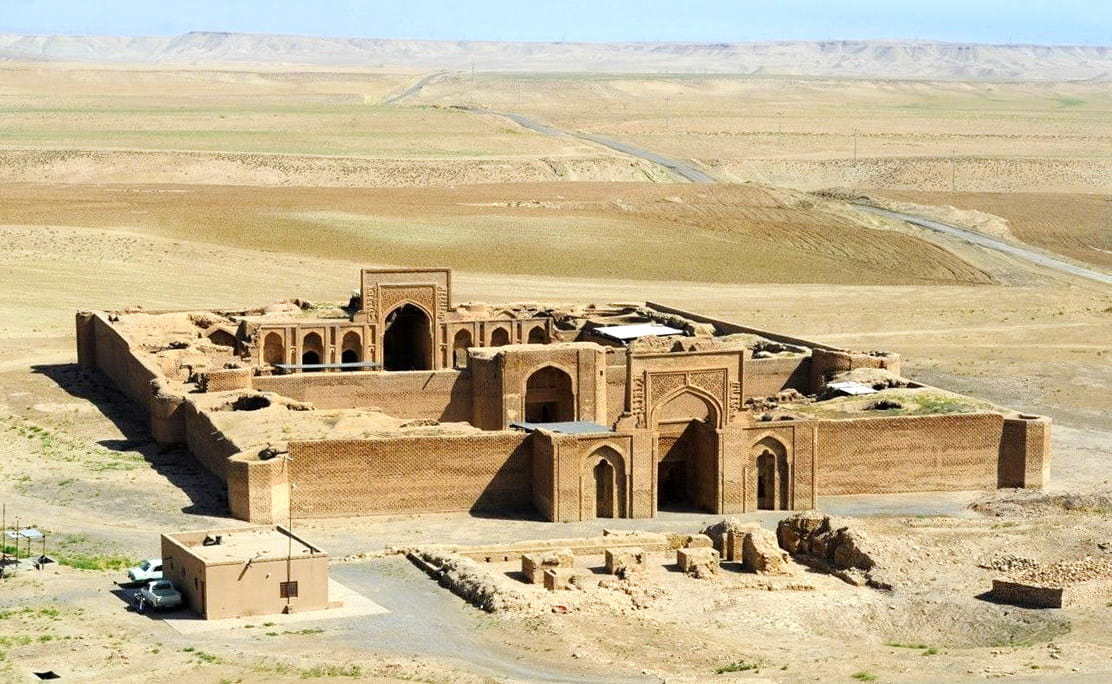 This caravanserai is of the type of four iwans and made of red bricks. Most of the travelers visiting Zanjan have mentioned the Nik Pey Caravanserai in Iran in their Travelogue. 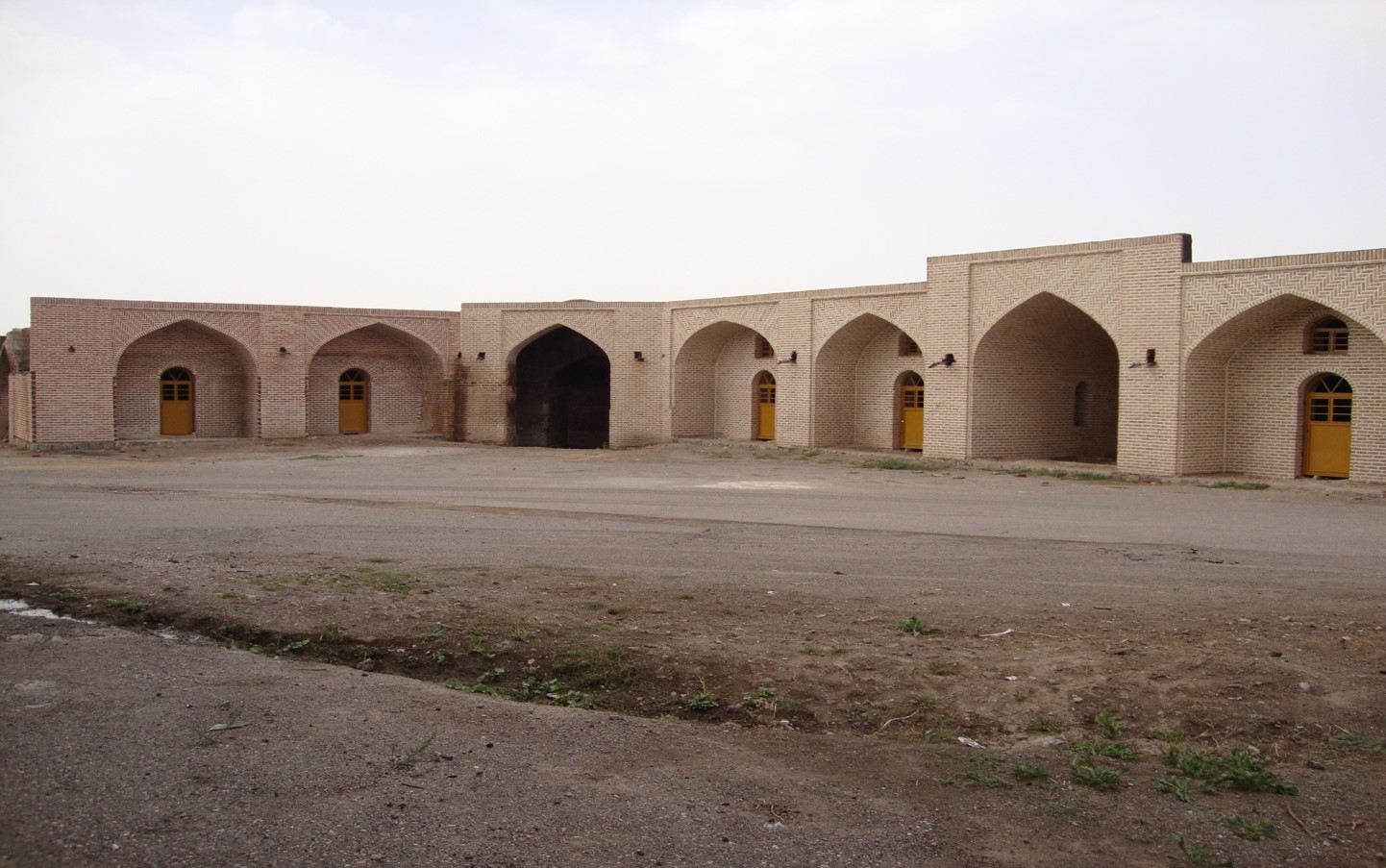 Qal’eh Shur Caravanserai located 20 kilometers southeast of Isfahan in the village of the same name. This caravanserai built during Qajar Dynasty and is one of the four iwans type, With square plan and central courtyard.

The Qal’eh Shur Caravanserai in Iran was registered as a national heritage by the Cultural Heritage Organization in 2000.

This beautiful green Iranian caravanserai, located 8 kilometers from the city of Siahkal. Titi Caravanserai build during Safavid Dynasty on the command of Titi Ms. (aunt of one of the Safavid kings). Caravanserai is made of stone and bricks.

A few years ago, this caravanserai, converted into a patio and beautiful courtyard by local people. Titi Caravanserai, also was registered as a national heritage by the Cultural Heritage Organization in 1996. 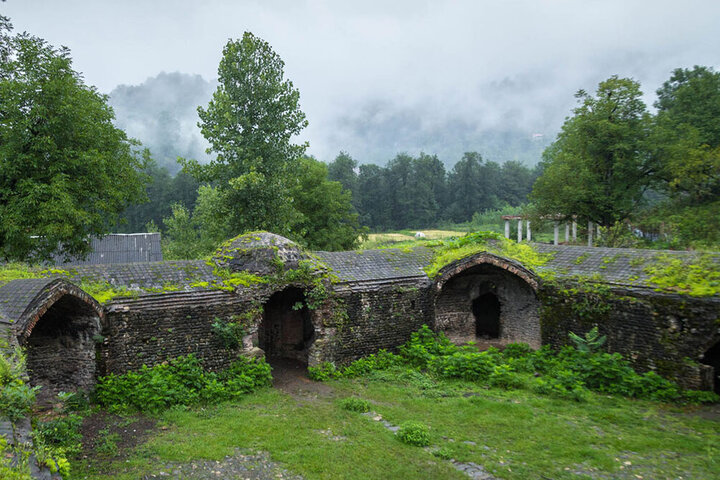 7.     Khanat Caravanserai – Pleasant Place in the Heart of Tehran

Khanat Caravanserai was the largest inter-city Caravanserai in Tehran. This Caravanserai built in the late Nasser al-Din Shah Qajar Era and it is nearly two centuries old.  Its architecture is brick-work and has two part, porches and aisles.

Khanat caravanserai is the largest of its kind, within central urban texture of Tehran. Nowadays, it is open to the public and many people go there for its traditional restaurant. 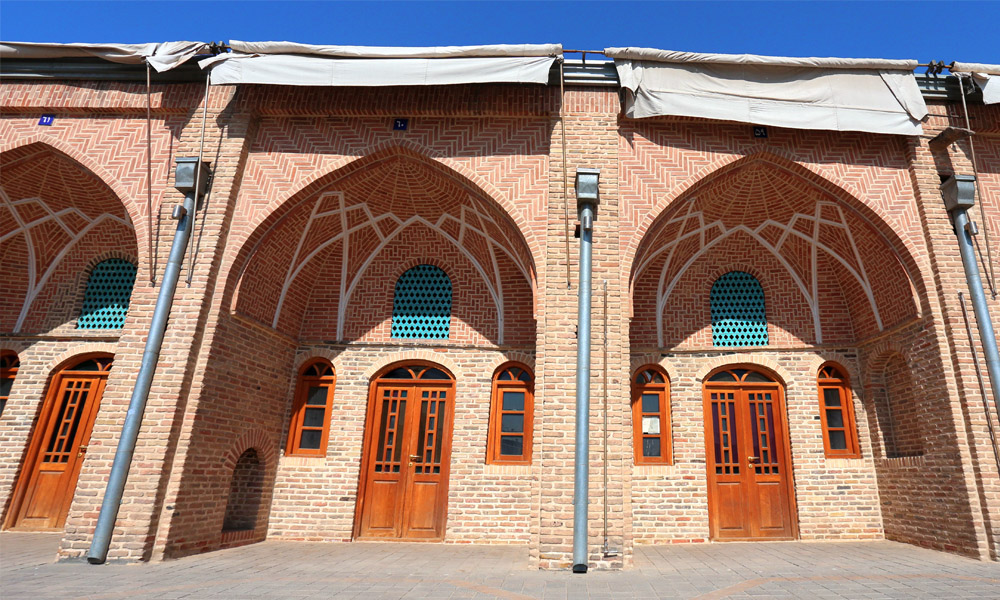 Although this Shah Abbasi caravanserai was built in the late Sassanid period, but because of its suitable geographical location, it quickly became one of the most popular residences for Silk Road businessmen.

The mother of King Sultan Hussein Safavid rebuilt this caravanserai in the eastern part of the Chahar Bagh school. About 60 years ago, the Pahlavi government restored the building and set up an upscale guest house to accommodate passengers. 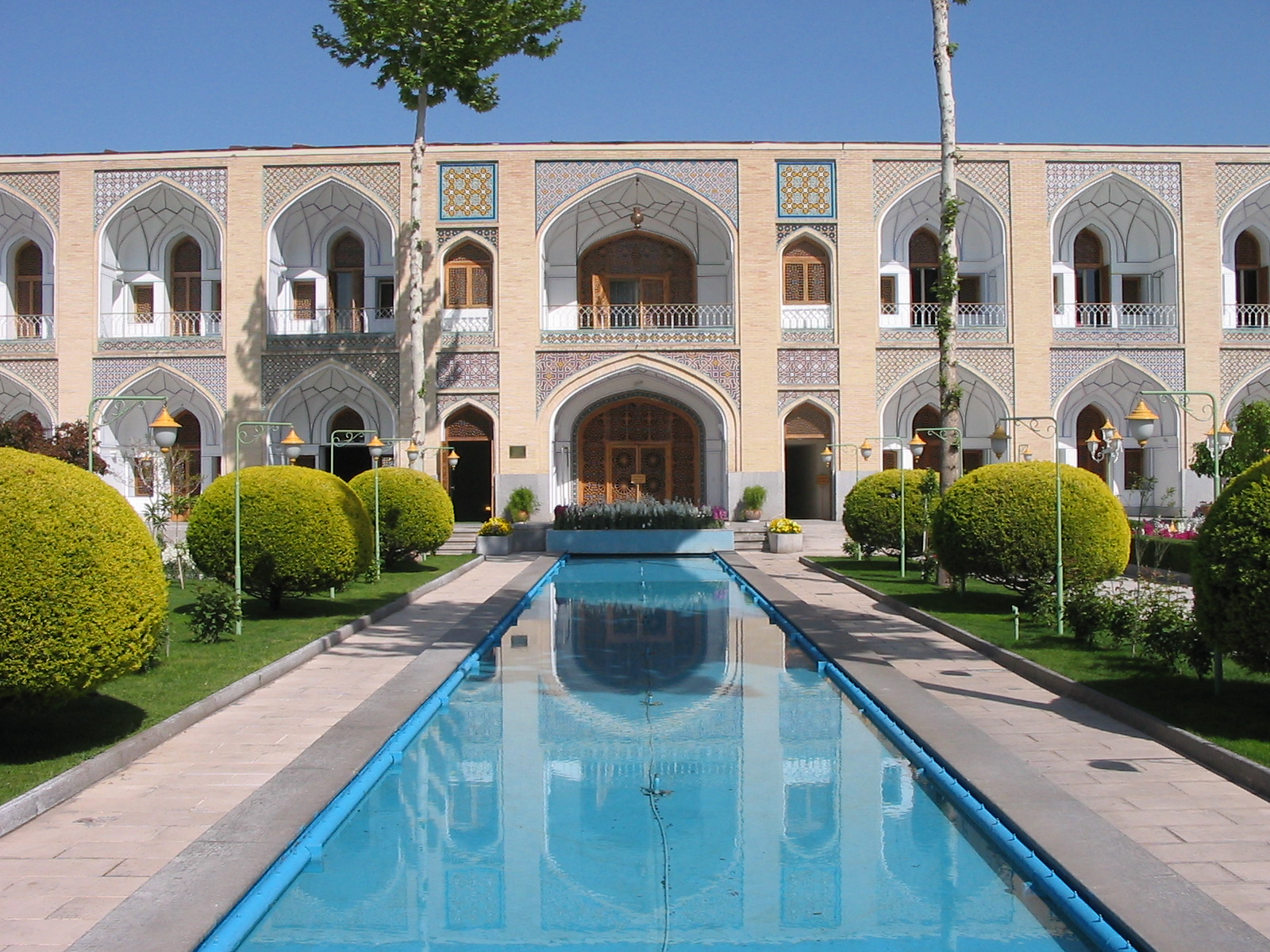 There are so much Beautiful and interesting examples of such caravanserais exist in the vast land of Iran. From the banks of the Aras River to the shores of the Persian Gulf. All of this is a reflection of the artistry and skill of the builders and the masters who in the different times and according to the needs have tried to build and expand caravanserais.