Takhte Jamshid – One of the glorious historical places in the world

Takhte Jamshid – One of the glorious historical places in the world

The word “takht” means metropolis and the royal seat in a palace, and “jamshid” is a symbol of monarchy and the one who celebrates ancient and glorious Nowrouz. So, Takhte jamshid means a majestic metropolis with a powerful king reigning over it. Takhte jamshid or Persepolis in this ancient city was constructed at the time of Darius the Great, Khashayar Shah, and First Ardeshir. This ancient place exhibits many aspects of Iranian culture and civilization and attracts many tourists from foreign countries every year.

Takhte jamshid includes a set of very big splendid palaces. Their construction began at 512BC and took many years to be ended. Takhte jamshid is located in a wide area limited from one side to Rahmat Mountain and from the other side to Marvdasht plain.

Takhte jamshid or Perspolis, as an Iranian tourist attraction, has remained from the era of powerful Achaemenid Empire. This massive structure includes different parts as mentioned below:

In the north-western part of Takhte jamshid, two rows of symmetrical stairways are located in front of each other, each with 111 wide and short step height stairs in each side. On top of stairways, facade of the Gate of all Nations is located as the entrance building to the royal collection. The building height is about 10 meters and winged men figures are painted on it.

Apadana palace has two sets of stairways located at the northern and eastern sides. Eastern stairways of the palace include two stairways and there are some reliefs on its side wall. On the side wall of northern stairways some reliefs of senior military and Persian commanders with lotus in their hands are observed; in front of military commanders, a standing army paying tribute.

In upper row of the same wall, images of some people with their gifts in their hands is seen, who are going towards the palace. On side walls of stairways facing the south, there are images of representatives from different countries with gifts in their hands. Each part of these carvings is specified to one of the nations. These carvings are the symbol of the world peace.

Apadana is one of the oldest palaces in Takhte jamshid. The palace has been constructed upon the order of Darius the Great. This beautiful palace has been used for receptions made for representatives from other countries coming to visit the king, and related ceremonies.

The ancient palace is connected to Tachara Palce or Mirror Palace through stairways in the south-western part. 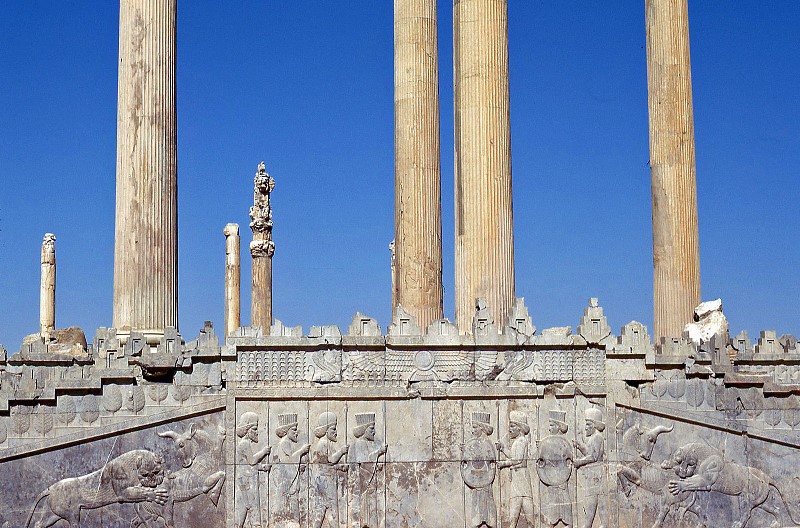 Tachar or Tachara Palace means winter palace. The palace has been constructed by Darius the Great as a exclusive keep for him. Main part of the palace, the porch and stone-made stairways in the south, as well as stone-made stairways at the west have been constructed respectively on the order of Darius the Great, Khashayar Shah, and Second Ardeshir.

Hadish Palace was the private residence of Khashayar Shah, built in the most upper part of Takhte jamshid. The palace is connected to the palace of queen through two sets of stairways.

The small main hall was reinforced with 6×6 rows of columns. Due to severe destruction, not much accurate information is available about this ancient beautiful palace, so it is also called the mysterious palace.

Hadish means a place located in height. It has been also the name of the second wife of Khashayar Shah. The palace is located in the southernmost part of the Takht jamshid. 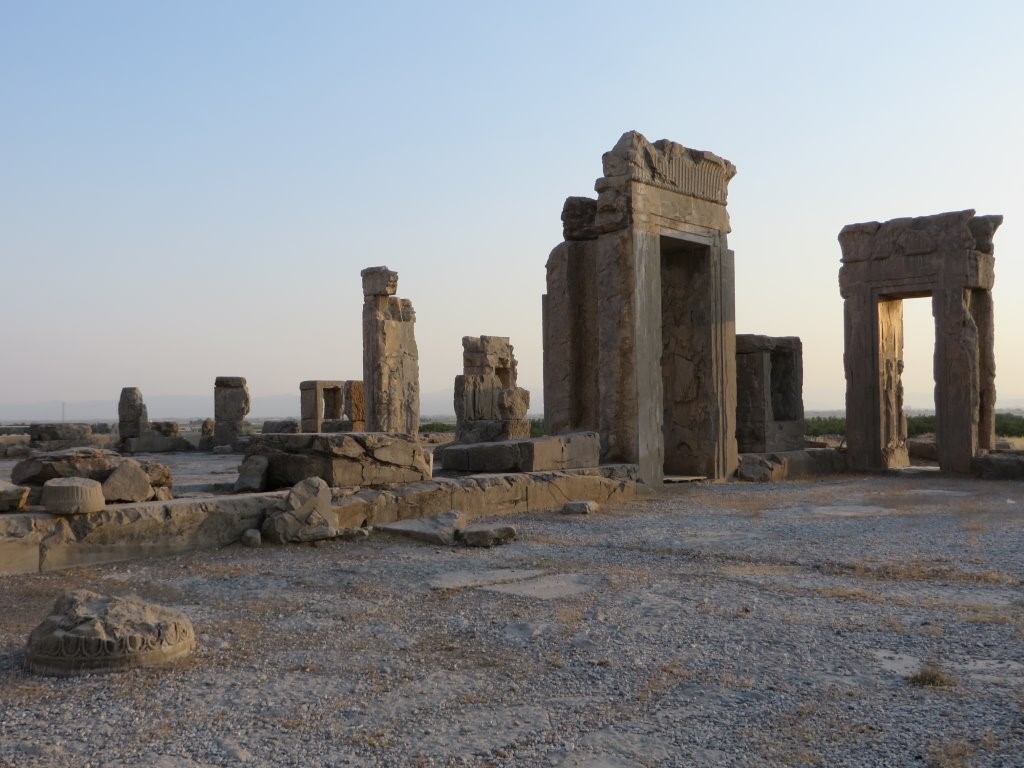 Queen palace was constructed upon the order of Khashayar Shah and is of lower height compared with other buildings.

A part of the palace was excavated and reconstructed in 1931 by Professor Ernst Emil Hertzfeld, a well-known orientologist. Nowadays it is used as a museum and central office of Takhte jamshid installations.

This palace was used as a place for unofficial meetings by Achaemenid Kings. In stairways of this beautiful palace unique bas-reliefs of famous Persian people are seen.

The area of this magnificent palace is about 46000m2. The roof is based on 100 columns each of 14m height. Annually, many tourists pay visit to this beautiful palace. Considering the figures designed, the entrance point of the king was one of the gates, and the other one was used as exit point from the palace.

This historical building includes several halls, rooms, and yard, and it is separated from other parts of Takhte jamshid with a huge wall.

Reliefs and bas-reliefs in Takhte jamshid

Many workers, architectures, and artists have played considerable role in the construction of beautiful palaces in Takhte jamshid. Stone-cuttings and carvings on capitals are among the most outstanding and spectacular works in this unique ancient building. One of the paintings and reliefs highly repeated in Takhte jamshid is lotus as a symbol of Achaemenid kings. In one of reliefs, Khashayar Shah is seen with a cane in his right hand and lotus in his left hand in a sitting position holding a levee and the prince beside him with lotus also in his left hand.

This ancient building with beautiful and unique palaces is one of the most famous historical constructions all around the world, so, attracting many tourists annually.

Check out the lastest Persian cultural and historical tours.