Zurkhaneh, literally “The house of strength”, is a traditional gym where ancient Iranians have been exercising for more than 7 centuries. It also was a symbol of resistance when Arabs invaded Persia in 637 CE which kept alive a spirit of bravery and perseverance.

This ancient sport is originally from Iran, although it can be found in Iran’s neighboring countries like Azerbaijan and Iraq. Zurkhaneh, which is recognized by UNESCO as the world’s largest running form of such training, has roots from the Islamic as well as pre-Islamic era.

The architecture of Zurkhaneh makes athletes feel a unique spiritual energy and the ritual itself develops ethical principles inside. Despite the fact that people are less interested in this kind of sport today, there are still people who appreciate and feel such a great respect for this tradition. Some actions are made by the government and people to revive this ancient ritual and new zurkhanehs have been made.

The Architecture of Persian Zurkhaneh

Zurkhaneh is mostly built near the bazaars (traditional markets) or business centers. So, calling zurkhaneh a “common social institution” wouldn’t be a mistake. In designing a zurkhaneh, the ceiling is mostly a dome which could be found in almost all holy places in the past. “Dome” is a symbol of heavenly force which makes connections with pure powers. Consequently, exercising under the dome is assumed as a sacred activity.

The center gymnasium of zurkhaneh is a quadrangle or hexagon sheet. Believers in quadrangles claim each corner refers to one of the classical elements, earth, water, air and fire. On the other hand, supporters of hexagon sheets say each corner refers to one of the six directions, north, east, south, west, up and down. Doors are made usually shorter than human height so that all athletes bend forward when entering and leaving, which teaches them the matter of the modesty and humility. 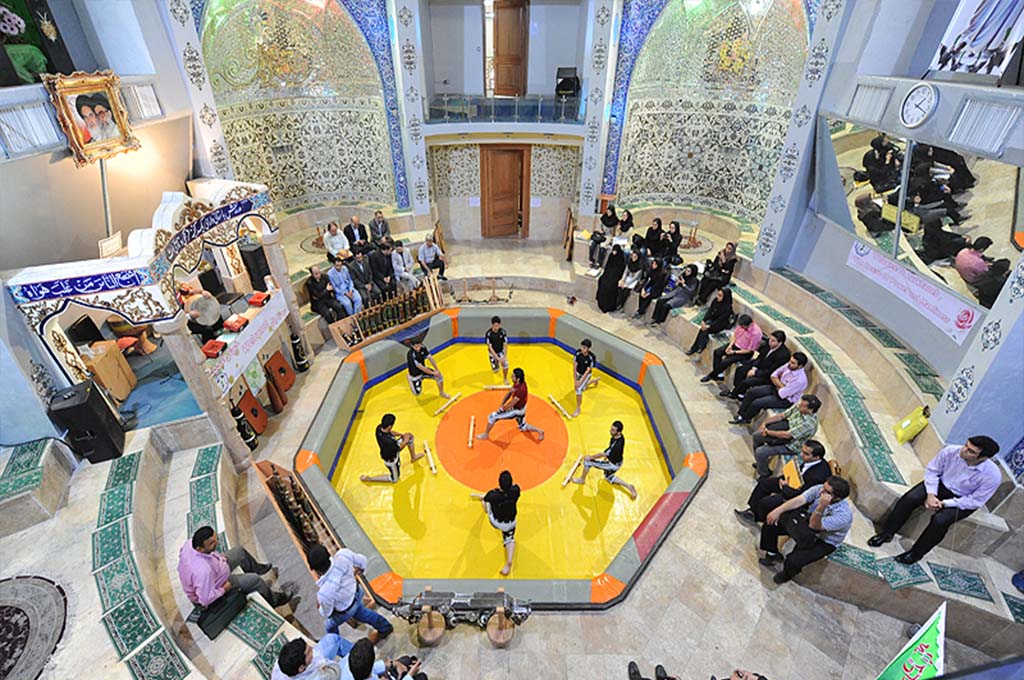 Near the main door, there is a special place named Sardam or Morshed place. In Persian Sardam means a person who is the head of singers. During the ritual nobody is allowed to enter or leave without Morshed’s permission. This glorious simplicity draws people to zurkhaneh and ask them to be gentle and sportsmanlike. 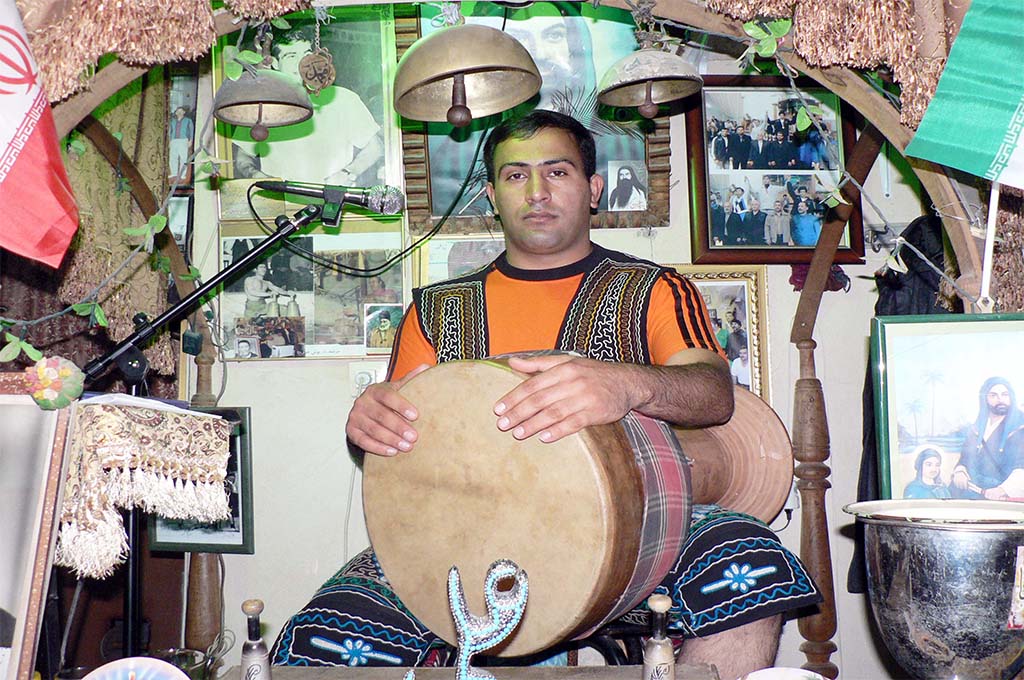 The principles are originated from Mithraism which is an ancient religion in old Persia. In Mithraism, treating the poor kindly and fighting the cruelty were the fundamentals. So, the culture of zurkhaneh and its rituals has a strong link with old beliefs which always are endeavoring to keep these magnificent traditions alive. Over time changes happened and made the ritual more professional and popular among people in a way people thought highly about athletes who went to zurkhaneh. Following the emergence of “Shia Islam” and “Sufism”, the ceremony absorbed some ideologies and also techniques.

Every session starts by admiring the prophet Muhammad and his family. Morshed Starts by playing a Persian instrument called “Zarb” while reading Persian poems and stories. The most important part of this ritual is weight training, using a pair of wooden clubs, metal shields and bow-shaped iron weights which are used to build a strong and powerful body. At the end athletes finish their jobs with Koshti, a form of fair battle using moral principles. The triumphant athlete collects more honor and the defeated should train more and more.

Zurkhaneh is the symbol of unity, morality and a place to learn how to be brave and how to resist against injustice and oppression. It doesn’t matter how old you are, Morshed will accept you warmly. This valuable and touching place is so inspirational which makes people move forward and never give up. The combination of traditional songs and exercises give people high level of alacrity and turn a soulless physical activity to a pleasant sprightly event which bring people joy and train them to be strong and happy. This ancient Iraniansport also makes people closer and sympathize with each other. This shining beautiful place encourages people to understand the matter of integrity. 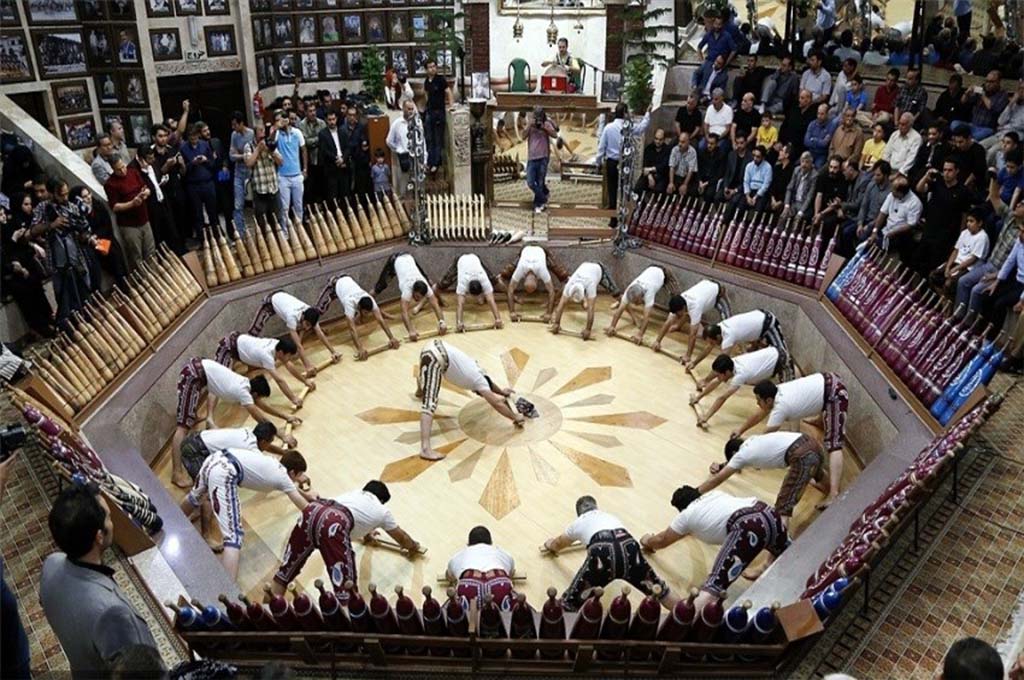 Where to find Zurkhaneh in Iran

You can easily find active Zurkheneh in several Iranian cities such as Tehran, Isfahan and Yazd.

Here are some of the active Zurkhaneh in Tehran

Here are some active Zurkhaneh in Isfahan

Here are some active Zurkhaneh in Yazd