Eram Garden – A Window towards Heaven

Eram Garden is located in Shiraz and is one of the nine gardens in Iran listed in UNESCO World Heritage Sites. It has been initially constructed in Saljuk period, and then it has been renovated, and/or some buildings have been added to it during Zandiyeh, Qajar, and Pahlavi eras. Eram Garden in Shiraz has its own beauty and is filled with beautiful ornamental and fruit trees. During the recent years, the garden has turned into a national botanical garden and somehow a scientific garden to be visited by university students and foreign tourists. In the following, you will become more familiar with characteristics of this beautiful garden.

If you are planning to visit Eram garden, check out Shiraz city tours.

At north-western part of Shiraz, there is a large space known as Eram Garden. The garden has numerous types of plants and trees planted in it turning it into a botanical garden. There are different ornamental eye-catching trees such as cypress, pine, weeping willow, maple trees, etc. planted there, in addition to such fruit trees as medlar, persimmon, pear, etc. The tallest tree in the Eram Garden (Sarv-e Naz-e Shiraz/scientifically called Cupressus sempervirens) is of 35m height. The main fruit tree planted in the garden is pomegranate. Manifold ornamental plants in different colors have created much increased beauty in the garden.

As told before, various fruit and ornamental trees are planted in Eram Garden. Walking on the pavements both sides of which cypress and orange trees (in addition to other types of trees) are planted, you will enjoy the indescribable beauty of the garden and inhaling fresh air. Walking through a garden with an area of about three hectares full of green plants, you will be filled with a wonderful divine feelings induced by such an environment.

A three-storey building is at the center of the garden which probably dates back to Qajar era. In front of the building, there is a big pond, and the image of the building reflects off it, and this multiplies the beauty of the building. Above all, architects and tourists have called the building a masterpiece of architecture.

The first floor of the building is called Hozkhaneh (springhouse), with a pond of cold water in the middle of it. This is why the place is cool during the warm days of year and has been used by the settlers of the building for resting. The second floor includes a room called Kolah Frangi, with a beautiful ceiling and colorful windows which the sunlight passes through them. 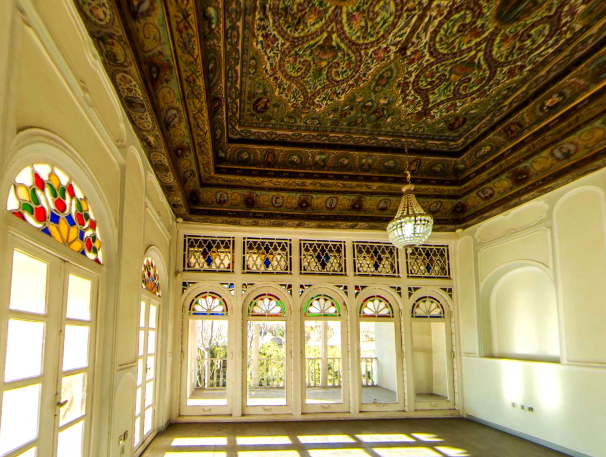 Big Porch of the Building

In the second floor of the central building, there is a big porch ceiling, elongated to the third floor, relying on two columns. The upper part of the porch is build with very beautiful tile work. Images of lion and leopard, as symbols of bravery, and a king riding his white horse are seen on the tile work. Blue is the color mostly used in these tiles. 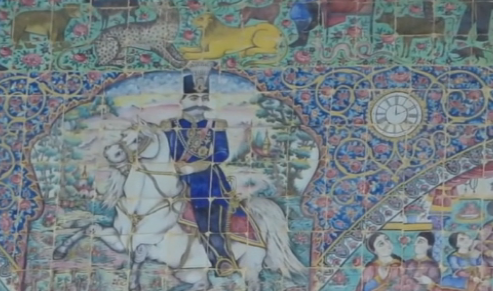 Museum of gem stones is located in one of the rooms in the first floor of the main building of Eram Garden. With more than 140 rare types of valuable gem stones in it, the museum is called Daryaye Noor. 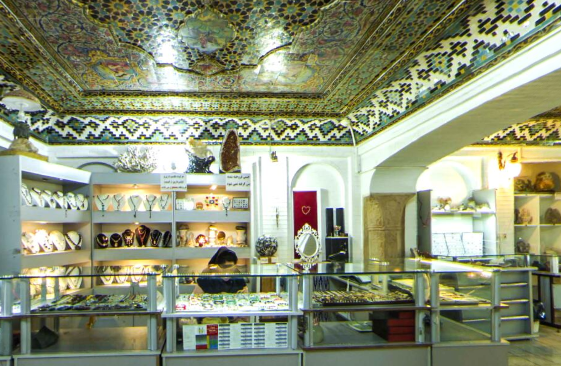 A part of Eram Garden is called stone garden as it is filled with many boulders, in addition to many trees. 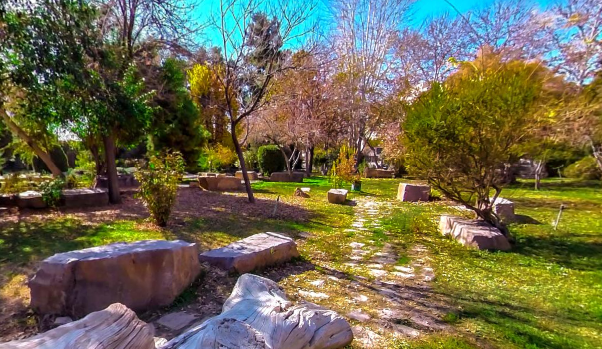 Behind the main building and at the western side of Eram Garden, there was an interior building including a small courtyard (compared with the garden itself). In front of the building, there was another building wherein servants and junior courtiers used to live. This courtyard is also a green one with a long pond in it.

At the western part of the garden, there is a natural fish pond in which small red fish are living. 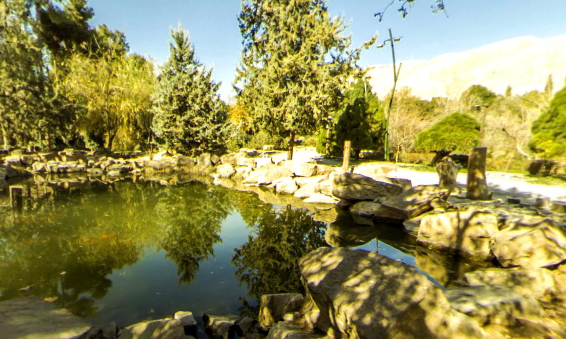 Adjacent to the main building of Eram Garden, there is a building in which famous Bahar Narenj sherbet (drink) is served, in addition to Faloodeh Shirazi. Various kinds of handicrafts are also sold there, among which you can buy inlaid works, marquetries, and etch works as souvenirs. Here, putting on traditional Shirazi clothes, you can take a picture as a remembrance.

Traveling to Iran, do not forget to have a trip to Shiraz with its numerous sightseeing spots including Eram Garden. Eram Garden is a garden worthy of visiting with tall cypress trees touching the sky as well as many trees bringing heavenly fruits. You can walk under the shadow of trees and enjoy fresh air. The historical building located at the central part of the garden is also eye-catching. Please do not forget to drink sherbet in the garden as well. Various types of colorful flowers have increased the beauty of the garden several times. Gem stone museum attracts everybody visiting there. The garden’s courtyard is indicative of the high social gap existing at the time.